Founded in 2006, it provides a platform to advance and promote Dutch world music both domestically and abroad.

Our activities are supported by Dutch rights-organizations Buma Cultuur, Sena and by the Ritmundo Foundation. For the international promotion WMF partners with Dutch Performing Arts. WMF is a member of Kunsten ’92, the European Jazz Network and Free Muse.

Dutch World Directory – gives you an overview of current prominent contacts in the Dutch world scene. 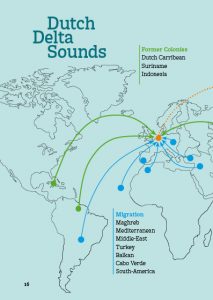 The river Rhine is to the Netherlands what the Mississippi means to New Orleans. In these ‘low lands’- the delta of Western Europe- multiple streams of cultural influences have both come down the river and in from the sea. They flowed in from Northern, Eastern and Southern Europe; since the 17thcentury from its maritime links with Africa, Asia and the Americas. During the 20thcentury political and economic changes led to a new massive influx of migrants. This added legacy profoundly colours our contemporary music world. So expect to find more than sounds derived from the former colonies Indonesia, Suriname and the Dutch Caribbean but also from the Balkans, Cape Verde, Latin America, the Mediterranean and the Middle East.

From the 1980’s on a dynamic musical eco-system developed with a wide range of artists, festivals, labels and venues.Today a new generation of artists leaves its mark. While anglo-american pop dominates press and RTV a bubbling musical undercurrent created a parallel universe. A new world where crossovers and a free spirit foster innovations in jazz, classical and pop.To inspire you we offer a fresh selection of promising Dutch talent, as featured in the spotlights: Altin Gün, Arp Frique, Lingua Franca, Niza Rohana, Shishani & the Namibian Tales, Son Swagga and Tabanka. Although each of them plays a different melody, together they represent a common undertone: Dutch delta sounds!

The figures on world & trad

As a follow-up of the national research program A world of Sounds & Opportunities, in 2014 WMF initiated the development of a European World Music Monitor(EWMM) to position the world music industry on an European scale. Aim is to create effective tools to facilitate the formulation of music policy and further empower the world music industry in general. This pilot program is currently being developed in the Netherlands aiming to include  European partners in the future.