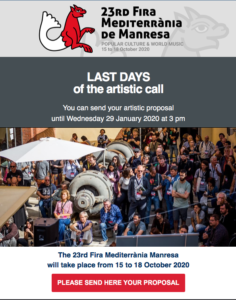 Fira Mediterrània Manresa is the strategic fair for artistic proposals which use root sources, tradition and popular culture as the drivers of creativity.

Fira Mediterrània works with what we call the 360 degrees of the root, starting with the first level, the intangible heritage, continuing through the associations of popular and traditional culture, which start with that heritage and work to connect it with society, and ending with the professional sector, the artists whose creations are based on that tradition. At the Fira, we attach particular importance to the interchange, interrelation and intersection of all of those.

It is a multidisciplinary Fira, where we propose three great itineraries:

This approach is materialised in the programming, which incorporates proposals in which the traditional roots are the creative force, roots with multi-faceted outlooks, and which speak to us in the present tense.

Fira Mediterrània structures a share of its programming based on three key elements: