I found it very useful and I liked that people who had such a useful initiative, so it was a pleasure to participate, passing a survey to several contacts in my country, to collect concrete, quantitative data on how many people are involved in one way or another in working with world music. I don’t think they found as much enthusiasm from all the people they asked to collaborate and the project was not concluded but I am sure it was very useful to sharpen the focus of their further efforts.

The European World Music Monitor project would be really interesting and useful if it can be taken up again in the future, by them or by some other organisation. To some extent, more recently the European Folk Network is developing a similar project, Mapping, oriented to folk music, which to some extent includes a good part of the musical manifestations that are considered world music. In any case, there is still a lot of work to be done and it is really very complex, as the reality of the different European countries is very different and the concepts are not understood in the same way in all cases.

But well, I’m going off on a tangent! Since then, contact with Sonja, and also with other people in her team, has been regular at fairs and other events.

As Sonja herself explains below, next autumn they will celebrate the 15th anniversary of this organisation and will face new challenges. I hope they will achieve everything they set out to do. In the meantime, let’s find out more from Sonja herself. 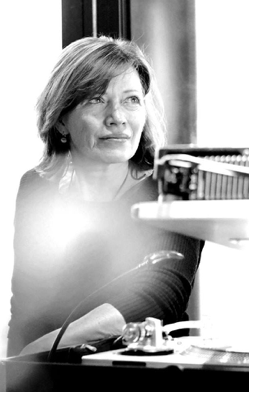 Mapamundi Música: Why was the WMFNL born? What were your objectives?

SH: World Music Forum NL was actually born in the summer of 2006 as a grass-roots – non governmental organisation because there was no actual organisation in the area of ‘world music’ in the Netherlands. Everyone was working on its own without any kind network or collaboration. A strong need was felt to join forces and strengthen the sector making world music visible amongst other genres like pop, classical, jazz, and contemporary music. Moreover there was an urge for acknowledgement, sence of pride and advocacy. At the time we formulated concrete goals:
1) regular network meetings to connect and stimulate collaboration;
2) research to present facts and figures proving the relevance and value of our sector;
3) conferences and expert meetings to advance development on key topics like music-archives, marketing – strategic scenario thinking, music-education, broadening the scope of stages;
4) collective national and  international promotion at Womex;
5) online platform;
6) Dutch World Music Award;
7) media outlets: Beyond Magazine – resulting in current online Mixedworldmusic.com;
8) recognition by Dutch policymakers and a paragraph on world music in the Dutch cultural policyplan (‘Cultuurplan’);
9) promotional samplers;
10) a Dutch World Directory (Who is Who) to connect stakeholders in the Dutch world scene.

MM: What resources did you have when you started?

SH: At the very beginning we had no financial- but lots of human resources at our disposal with strong believes in our mission & goals. First of all we initiated a tight and enthusiastic team representing the eco-system of the Dutch worldscene in its broadest sense. Thus World Music Forum NL was founded by a polyphonic bunch of musicians, promotors, journalists, festival- and venue programmers (until today our Advisery Board consists of an identical mix). This grassroots approach enabled us to work on the basis of solidarity and goodwill. 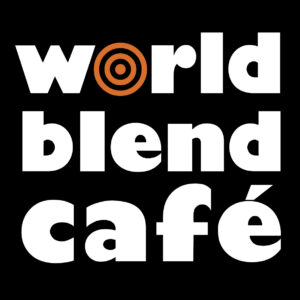 The Tropentheater in Amsterdam was so kind to host our World Blend Cafés during the first five years. ‘World Blend Café’ is like a mini-Womex. An informal network meeting consisting of a buffet, panel-discussion, several pitches, showcase and live dj-session in one. Over the years we have hosted over 100 World Blend Café sessions, many new matches and initiatives were born here.

👉 The next World Blend Café is announced for June 24th, in Rotterdam. More information, here.

MM: What is the legal form of the organisation?

SH: WMF NL is a foundation. Up to now membership was free for all. To stimulate accessibility anyone interested could visit our network meetings without any charge. However for the near future we will ask more commitment from our field with payed membership.

MM: There are quite a few of you, but according to what you say on the website, most of the activities are carried out by volunteers. Even so, you have some expenses, such as the website, the presence in fairs, the logistic costs of the World Blend Cafe, don’t you? How do you cover your financial needs? You have some support, such as Buma Cultuur and Fonds Podium Kunsten. Do you also have contributions from your members or do you offer any product or service as well, from which you get any return?

SH: Gradually over the years we have managed to get acknowledgement and support from two Dutch rights organisations: Buma Cultuur and Sena Performers. 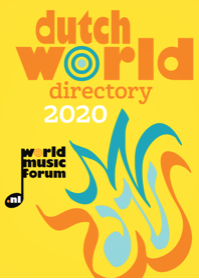 Concerning international activities like Womex we receive additional funding by the Dutch government through its Dutch Performing Arts Fund and local Dutch Embassy’s as well.

Up to now we have tried to keep the network accessible for all without any costs. Organisations and individual musicians only contributed for some limited services, such as a personal page in our Dutch World Directory. However since we are dealing with receding funding we need to safeguard continuity and support by the stakeholders. Therefore we need to introduce a paid membership system in the coming year.

MM: Can you explain a bit more about “Kweekvijver”?

SH: This word actually means ‘breeding ground’ or ‘spawning pool’. Creating opportunities for new initiatives belongs to our main objectives, especially in the informal setting of our World Blend Cafés. Not only by staging young bands but also by offering a platform for ‘3-minute pitches’ from people who look for collaboration and connection. At an average of four /five sessions a year these network meetings are hosted in relevant venues spread around the main cities like Amsterdam, Utrecht and Rotterdam to connect as many members as possible.

MM: You have several Spotlight artists on the website, but the latest edition is 2019-2020. Are you going to do it again? If so, how do you decide who these artists are?

SH: Indeed our spotlight artists represent the tip of the iceberg of new exciting initiatives and talent with international appeal. And yes we will continue to present new Spotlights. Unfortunately due to Covid-19 we had to skip the last two years. A jury consisting of experienced programmers will present their new list of hand-picked spotlight artists around WOMEX 2022.  Mehmet Polat & Embracing Colours, Dr. Jordan Institute and Magda Mendes were the latest artists in 2019-20 to be  selected for the Spotlight.

MM: What are you working on now and in the medium term?
SH: Currently we are looking for ways to get our scene back on its feet while trying to recover from the pandemic. Especially in difficult times it is essential to meet colleagues, exchange insights and possibilities for collaborations. At medium term both media attention and audience reach are very high on our agenda.Other urgent issues: musical education, talent development, music archives, involving younger generations, internationalisation, sustainability, signalling current trends and developments like hybridisation. Autumn 2022 we celebrate our 15th anniversary with a conference and several showcases. Some of the above-mentioned issues will be addressed as well. Vital future point of attention is to ensure the continuity of our World Music Forum NL. Largely depending on goodwill and limited contributions we shall need a more solid ground.

MM: What would you highlight as the main achievements of WMF NL during the years you’ve been working? 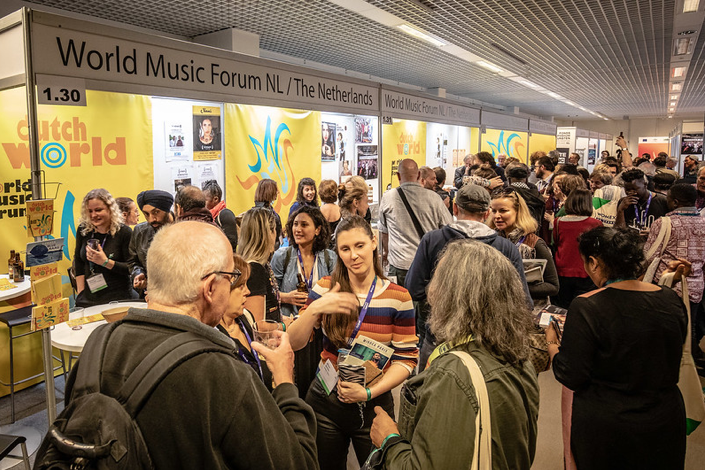 SH: We have been able to map out a network of around 3000 contacts of organisations and individuals involved in the Dutch world music scene, probably just the tip of another iceberg.
Firstly we are proud of having the acknowledgement by our governmental institutions being a solid grassroots platform for the worldmusic scene in the Netherlands. We have reached most of our goals with very limited means, however now it is time to make our platform future-proof.
Second highlight is the on-going success of our World Blend Cafés. Since 2006 when social media put human relationships upside down, these blend-meetings functioned as an alternative face-to-face book. Therefore we are proud to discover how this way of warm instead of cold networking inspires many other initiatives, has been adapted both at home and abroad. We take this as a compliment.

MM: Do you want to explain anything else?

SH: Yes! First of all, I would like to refer to your introduction – and the paused European World Music Monitor project. Perhaps it was too ambitious at the time. But let’s see if the near future the European world music scene will bring an opportunity to join forces to quantify collective facts and figures. Indeed it would be great if we this idea could be integrated by EFN’s mapping, and would really be a helpful tool to profile our sector on a bigger scale.

Secondly, one of the most interesting and unique qualities of Dutch World Music is its geographic and cultural history which shaped its musical identity. Imagine: the river Rhine is to the Netherlands what the Mississippi is to New Orleans. In these ‘nether’/‘low’lands- actually the delta of Western Europe- multiple streams of cultural influences have both come down the river and in from the sea. From all over of Europe but since the 17th century from its maritime and colonial links with Africa, Asia and the Americas. During the last 100 years political and economic changes led to lots of new influxes of migrants. This added hybrid legacy now multicolours our contempory music world, echoing a dynamic music ecosystem called Dutch Delta Sounds. Think of Altin Gün, Amsterdam Klezmer Band, Arifa, Boi Akih, Cabocuba Jazz, Jungle by Night, Karsu and many more to come.
Check our Spotlight artists overhere and … stay tuned! 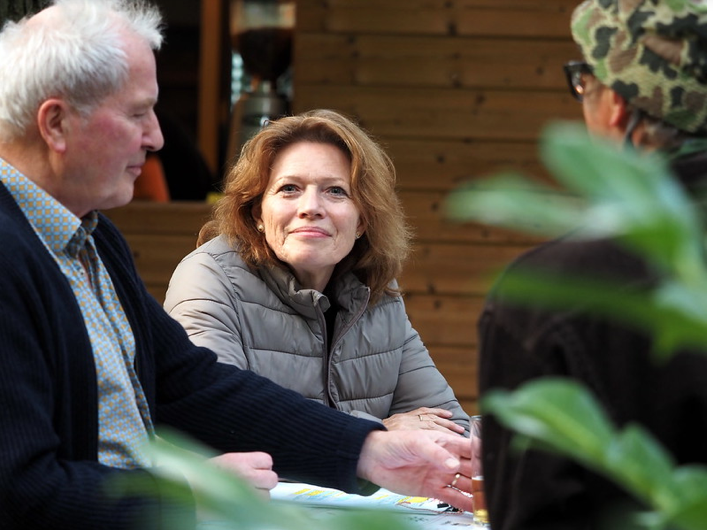