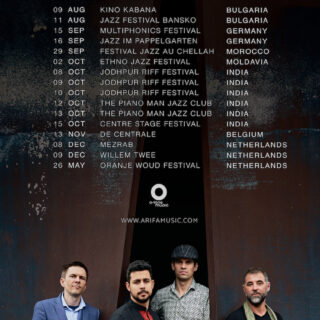 In Arifa’s music East and West flow together seamlessly to become a dazzling amalgam. Ancient musical traditions from the Middle East and Balkans are blended with jazz and contemporary improvised music.  The spirit of the ensemble is reflected in its line-up as well. A new addition to the sonic palette is the kaval, an end blown flute from Bulgaria that was traditionally used by shepherds to gather their flock of sheep. The Danube, Europe’s second longest river, rises in the south of Germany and empties almost three thousand kilometres eastward into the Black Sea. For millennia it has been used as a gateway and trade route by such peoples as the ancient Greeks, Hungarians, Turks, Dacians, Germans, Slovaks, Serbians and Bulgarians.